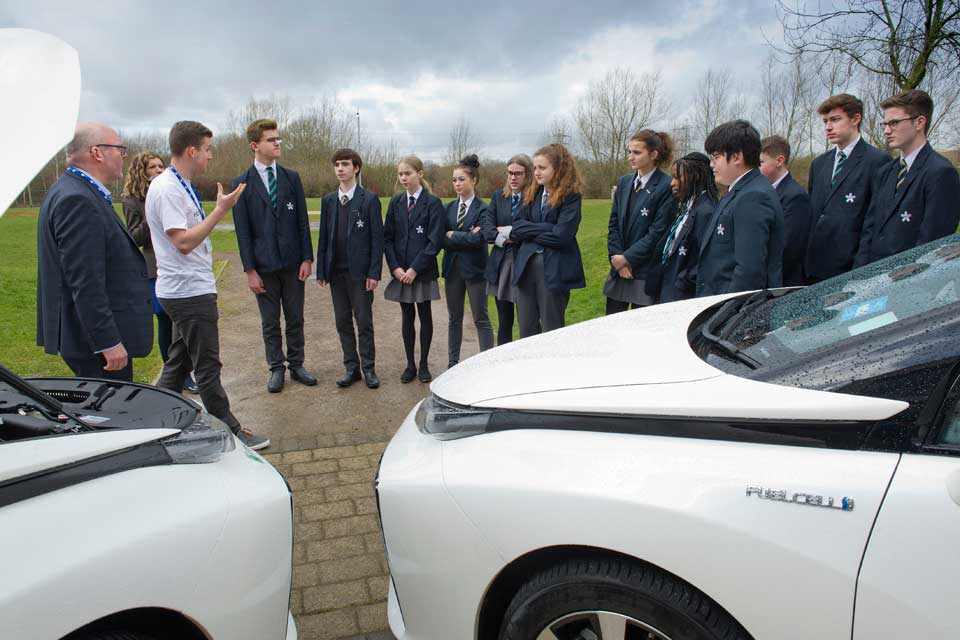 A new set of teaching resources focusing on hydrogen and fuel cell technology have been created by Arval, part of the BNP Paribas banking group.

Developed in partnership with the Hydrogen Hub, the education pack supports the Chemistry element of Triple Science for GCSE students, providing teachers with a learning resource that is downloadable online.

The pack introduces pupils to fuel cells as a solution to tackling climate change. Following a launch at two Swindon-based schools, Bradon Forest and Nova Hreod Academy, the resource is available to view and download on the teacher resource website TES.

Pupils at the Swindon launch, which is where Arval’s UK Head Office is based, were able to see a variety of hydrogen fuel cell powered vehicles, and get their hands on a fuel cell provided by Fuel Cell Systems, as part of lessons delivered by the Hydrogen Hub team.

The partnership between the three organisations is set to continue throughout 2019 with a set of hydrogen roadshows at 5 venues across the country planned for later in the year. The transport-focussed events will give businesses, and the general public, the chance to see, ride in and learn about hydrogen powered vehicles.

Rory Mathews from the Hydrogen Hub, said: “As a former teacher and Teach First Ambassador I know the quality of resources produced by industry specialists can be extremely high. Often though, the topics covered are not those that need to be taught in schools and so these resources get overlooked. It has been a pleasure to have been given the opportunity by Arval to produce this fuel cells lesson pack. I am confident that using our specialist knowledge at the Hydrogen Hub and tailoring the content to cover crucial exam content we have produced a resource that delivers high-quality learning for students and is extremely valuable to teachers.”

Dr Jannine Clapp, Head of Science from Nova Hreod Academy, said: “Having the opportunity to see first-hand how technology can be used for cars in a real world application was a real bonus for our triple science students. And this lesson along with the excellent resources created by Arval, Hydrogen Hub and Fuel Cell Systems for schools will help support the scientists of the future. Thank you for coming in to share with our school.”

Arval, which leases more than 165,000 vehicles in the UK, joined the Hydrogen Hub in 2017 to better understand the practicalities of operating hydrogen vehiclesthrough real-world use, and quickly became Chair of the Car Working Group.

At the same time, as part of BNP Paribas, the company says it is committed to supporting the transition into cleaner vehicles, positively serving the UK economy and investing in initiatives which benefit UK society.

Tracey Fuller, Head of CSR for BNP Paribas said: “As one of the UK’s largest vehicle leasing companies, new vehicle technology is high on our agenda, and an important tool for businesses and individuals looking to reduce their environmental impact. It’s also really well aligned with our commitment to make a positive impact on the UK economy, and wider society, so we saw a great opportunity to use our relationship with the Hydrogen Hub to educate the next generation in the role that hydrogen technology can play.”